If you’re looking to help solve a great mystery, this is one for the ages! I’m reaching out to the public for help, and am hoping to crowd-source some missing photographs.

I’m the grandson of the late Col. Maurice L. Martin (USMA Class of 1943, pictured right), who was a fighter pilot in 3 wars including WWII. “Colonel” had quite a career in the US Air Force. After graduating from West Point, he went to Germany at the end of WWII, and was a commander by 1947.

Later, he went on to become the third Athletic Director for the Air Force Academy from 1960 – 1963, and oversaw the building of the Falcon’s stadium!

In November, 1946, my grandfather got married in Germany. But this is where the story really gets interesting!

Because of his rank and influence, many of the higher-ranking fighter pilots who were in Germany at the time attended his wedding.

After several family members have spent years researching where these photographs might have turned up, and after I’ve spent months writing emails to various museums, the National Archives, and various Air Force historical associations, as well as countless hours on Google, I’ve decide to reach out to the public for crowd-sourced help in finding any photographs of my grandfather – but especially for help in finding any possible wedding photographs! 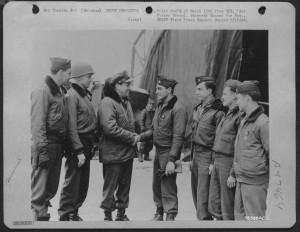 My grandfather is pictured 3rd from the right.

Here’s a snippet of Col. Martin’s career around the time that he got married:

The wedding was at St. Peter’s Church in Fritzlar, Germany, and the reception was at the Fürstenhof Hotel, in Bad Wildungen.

This is an interesting account from one of my aunts before my grandmother passed away several years ago:

Mom had found out from one of their friends at the Pentagon (while dancing with him at some affair) that he had seen their photos in Classified documents that at that time were still classified. He told mom that he had seen her wedding photos. She replied that their weren’t any because of bad developments and he told her that they had been sold to the Russians. When I searched, with help from a member of the Armed Services Committee in Congress, I was told that the documents were no longer classified but that they were filed under the name of the Russian spy who had them when captured, so we needed his name to find them.

No additional information is known about the photographer. At one time, I believe someone in my extended family contacted St. Peter’s Church to ask if they have any records from that time period, and learned that they do not. However, I have not directly corresponded with the church (nor do I speak or understand German).

If you, or someone you know, might be able to help me locate these wedding photographs, please leave a comment below, or contact me. Thank you in advance!

I sent the following letter to Senators Alexander and Corker this morning (4/25/2014) through their respective Contact pages, and wanted to share it with the public.

Senators Alexander & Corker,
My name is David White, and I am an IT professional in Chattanooga. I am the Founder of Barred Owl Web, an IT consulting firm that helps nonprofits.

In 2012, I sent you an open letter I also published on my blog in opposition to SOPA.

Today, I’m writing with my opposition to the recent FCC announcement. The FCC’s decision to back an “Internet Fast Lane” is wrong and not only harmful to consumers, but also harmful to small businesses and nonprofit organizations, including our clients. As I described in a Press Release issued through Barred Owl Web yesterday (https://barredowlweb.com/2014/04/24/fcc-decision-to-back-internet-fast-lane-is-wrong/), the very act of creating a “fast lane” will, by default, slow down other websites. Internet users are very finicky, and the slightest delay of a website will directly correlate to an increased “bounce rate” and a reduction of website engagement. Nonprofit organizations will lose access valuable donations, and small businesses will lose clients.

Please do whatever is possible to influence the FCC’s recent terrible decision.

I've noticed in the past 2 weeks at the #Anglican church I've been attending this summer, that when the congregation is participating in the liturgy, it reminds me of the Borg. Have I been watching too much Star Trek?

If you're in the #UK and looking for a new job in #DevOps, come work with me at @EDBPostgres! It's a great company culture, great benefits, and remote! https://grnh.se/bebab08d3us

@MarshaBlackburn @SenatorHagerty In Tennessee, 13.8%, or more than 710,000 adults, have been diagnosed with diabetes. Why did you vote to NOT cap insulin at $35? Explain this. Explain voting to allow Tennesseans to die. Justify this. #diabetes #Tennessee

I've come to the conclusion that smoked paprika makes just about anything you're cooking taste better.

Between that, my spaghetti, my signature Almond flour & Paprika encrusted chicken, and my Basil Pasta Chicken, I just might open a restaurant!